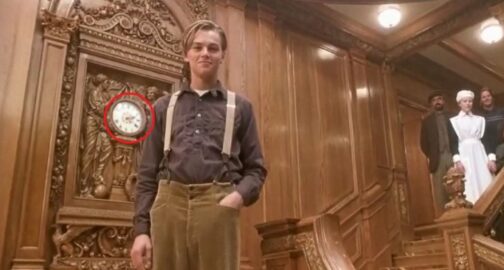 Sometimes directors add small but incredibly genius details to their films. Those details can be hard to notice. Because of that, we often miss them even in our favorite movies. Such things add an additional flavor to films, making them even more fascinating and sometimes more accurate. Let’s see the details you probably missed in these 15 popular movies. You will be surprised!
1) Titanic 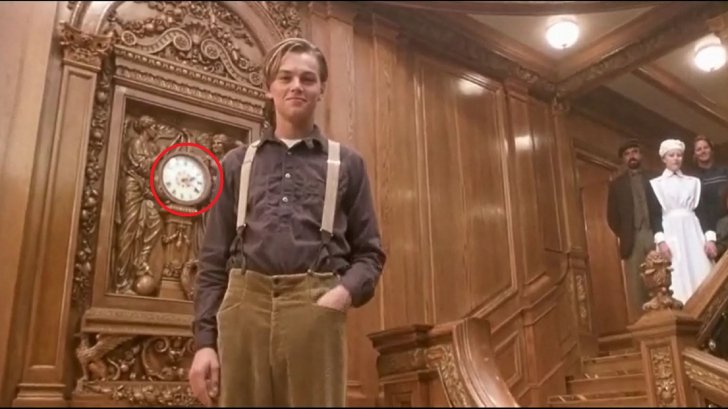 Here we see the last scene from Titanic, and please look at the wall clock. You probably missed the timing there, 2:20. As the film director James Cameron explained, it is the exact time when the actual Titanic ship went into the seabed. Genius and accurate, but easy to miss!
2) Spiderman 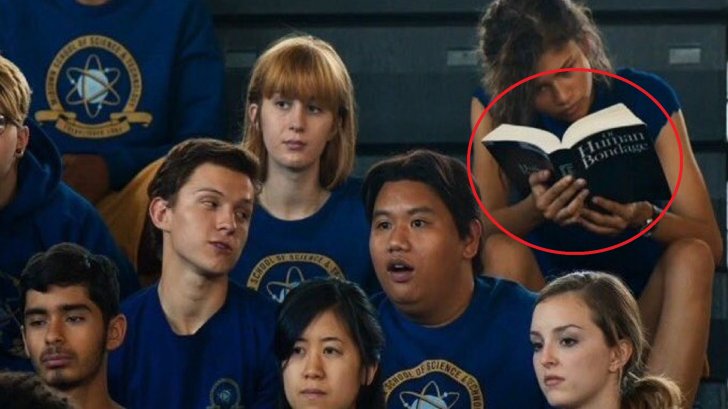 Which genius detail can you see in this scene? If you pay close attention, you will notice Zendaya reading a book titled Of Human Bondage. It is a novel about the character of Philip Carey, who is orphaned and lives with his aunt and uncle. Just like Peter Parker! 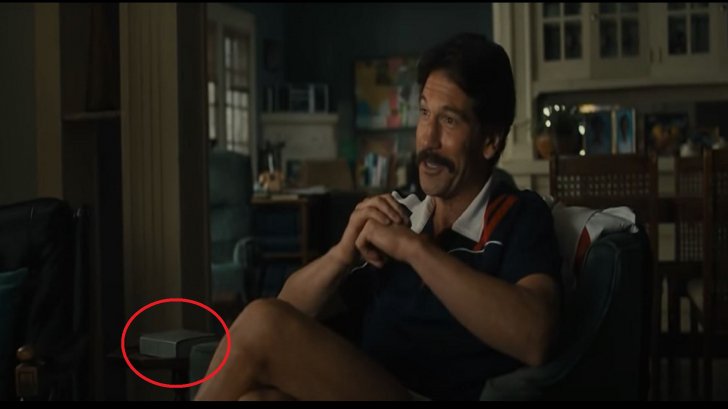 Probably you did not even note this small but incredibly genius detail: the silver-colored book that lies on a table at the right side of the trainer. As most fans already know, Venus and Serena Williams used to attend meetings of Jehovah’s Witnesses. So, for more accuracy, the film director put here the Bible produced by this group.
4) The Avengers: Age of Ultron 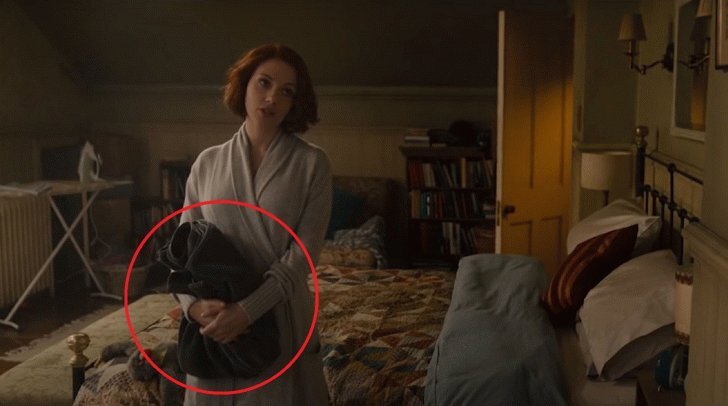 What detail did you miss here? In this movie, filmed in 2014, Scarlet said that she was pregnant. Deciding to hide that fact from you, the film director always tried somehow to cover her belly. That is why in this particular scene, she holds a pillow. So simple but so genius!
5) Django 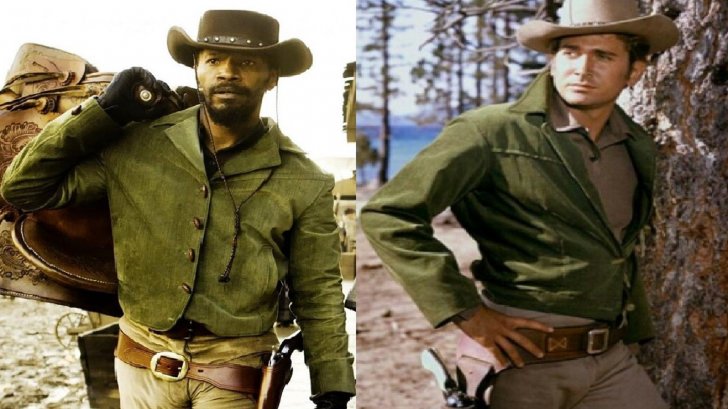 Did you know? Michael Landon wore the same-colored clothes in American western Bonanza. This TV series lasted for 14 years and was popular in the 1960s. So, in this way, Django reminds us of an old cowboy.
6) James Bond: Die Another Day 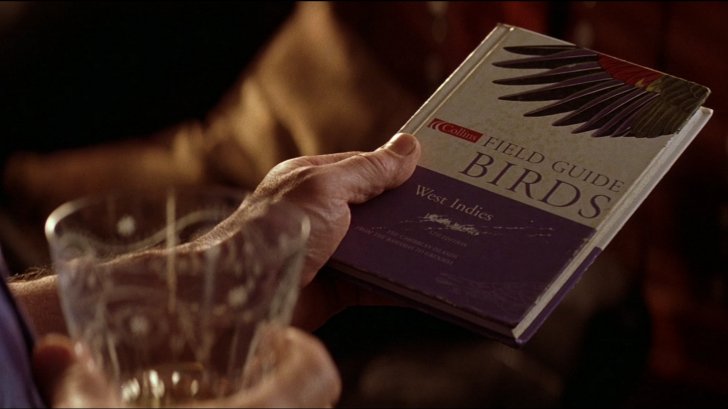 In this scene, Agent 007 holds the book “Field Guide Birds West Indies” written by a real ornithologist called James Bond. Later, when agent Bond meets with Halley Berry, he identifies himself as an ornithologist, claiming that he is interested in birds. To cover that detail from you, the film director Lee Tamahori deleted the author’s name from the cover.
7) Pursuit of Happiness 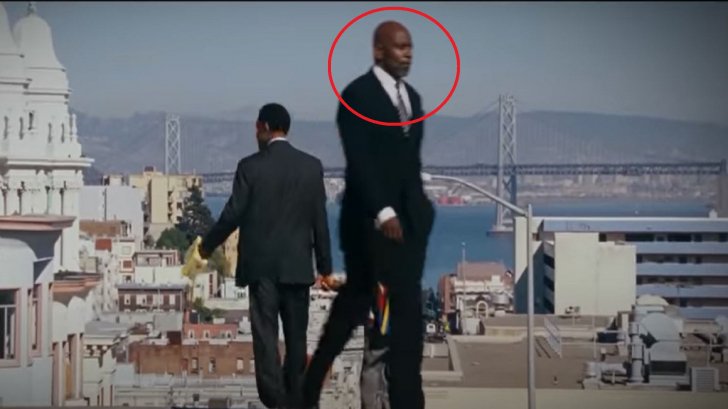 As you probably know, this is a true-story-based movie that is about Chris Gardner, an American businessman. Check out this particular scene where Will Smith turns back and gives a hint. About what? Who do you think is the person marked in red is? Yes, Chris Gardner.
8) Die Hard 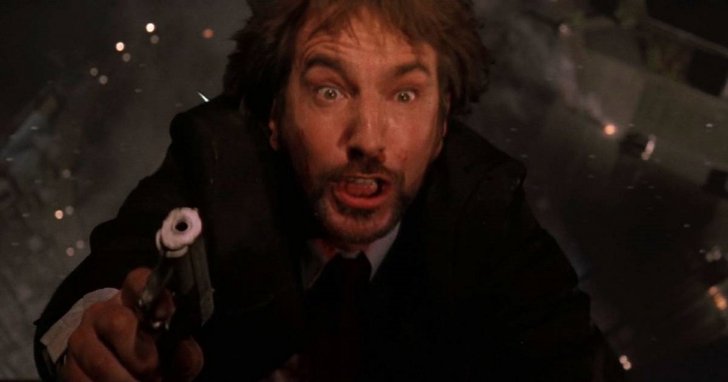 Looking at the terrified face of Alan Rickman, you might think that it is a professional performance! But in reality, it is all about the movie crew trick. They told Alan they would drop him after counting to three, but they did it in the count to one. Funny? Not, for Rickman.

9) Indiana Jones and the Raiders of the Lost Ark 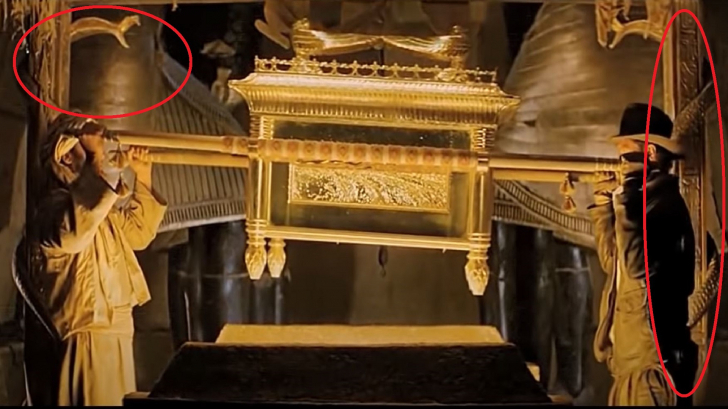 Can you see the snakes on the pillar? What connection might these have to the ark? According to Bible, Moses made a serpent of copper and put it on the pole. So the movie crew copied that because the ark and serpent statue was made by the same person, in the same period.
10) Evan Almighty 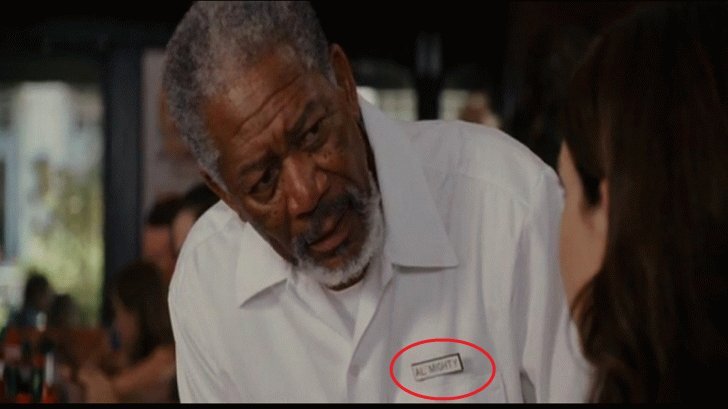 What else did you miss here? Please look at the red circle. Here we can see a signature “Al Mighty”. Although it is spelled like a name of a person, it shows that Evan’s wife is talking to God. But she missed that detail just like the majority of the audience.
11) Fast & Furious 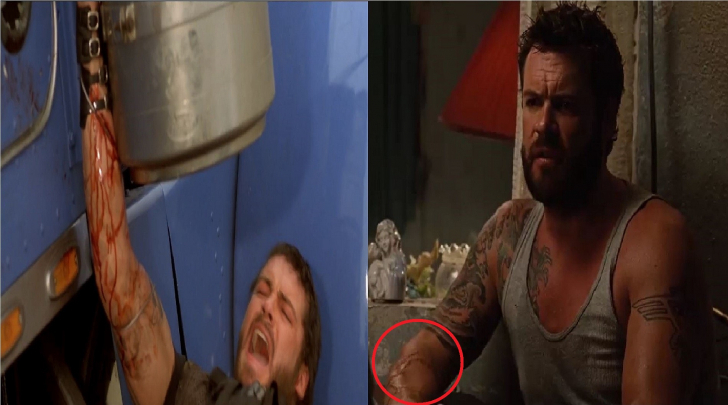 In the first Fast & Furious 1 movie filmed in 2001, Vince gets trapped on the truck with his right hand. After ten years, his character re-appeared in the Fast & Furious 5 film, where he had a scar on his right arm. This way, the film director genially depicted this detail that made the whole series as one story, and for this reason, Brian stares at the scar.
12) The Dark Knight 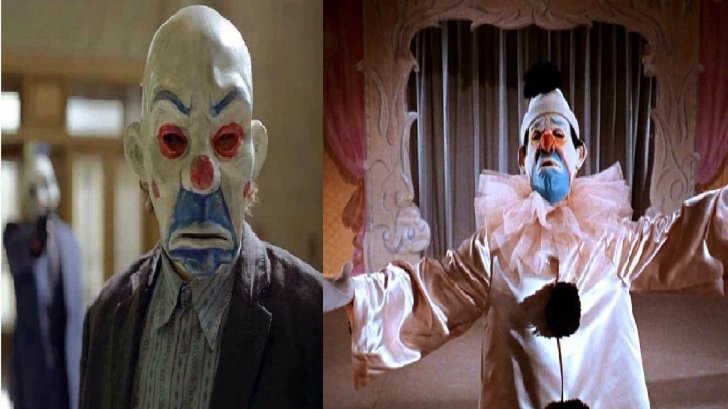 In the movie “The Dark Knight”, the camera goes closer to the mask that has Joker. What do you think, why? Do you remember the first Batman movie that was filmed in 1966? Probably, no. In that film, Joker had the same musk. So, this scene connects old and new versions of the character. 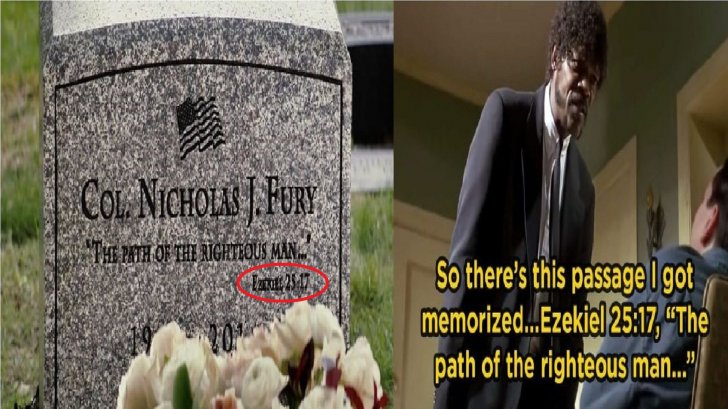 Nicholas J. Fury’s memorial tomb quotes Ezekiel 25:17 in Captain America: The Winter Soldier movie. An interesting thing behind this fact: in the Pulp Fiction movie, Jules Winnfield’s character uses this exact phrase. You may be wondering, what is genius in that? Samuel L. Jackson played both characters.
14) Pirates of Caribbean: The Curse of the Black Pearl 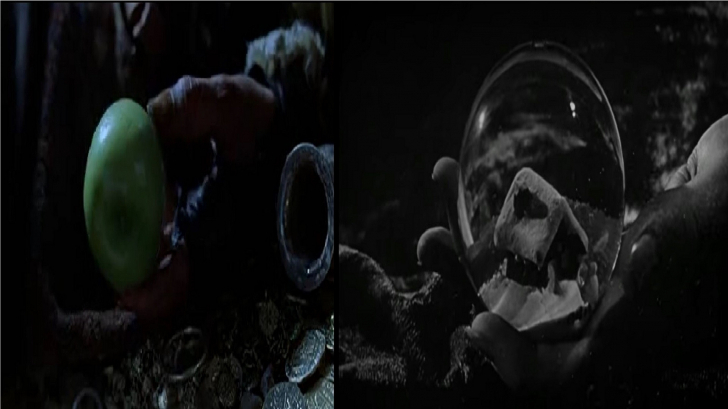 Another genius detail that you probably missed is Captain Barbosa’s green apple falling when he dies. Why does this moment matter? Because it was inspired by the popular movie Citizen Kane when a character drops down a snow globe when he dies. It seems that the film director Gore Verbinski liked it so much that he repeated it in this movie.
15) Terminator 2: Judgement Day 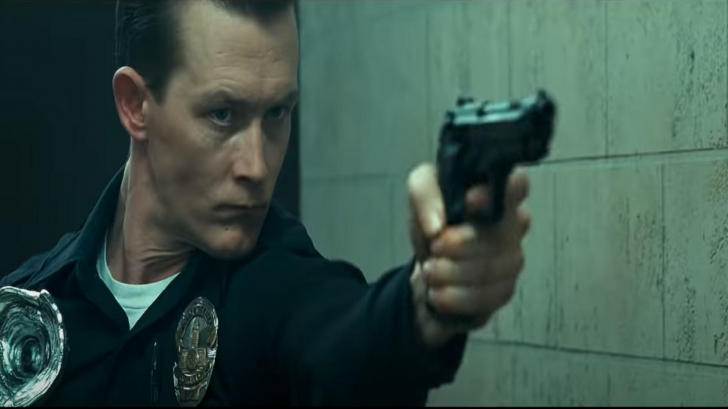 And the final incredibly genius detail in the popular movies is an evil terminator. If you pay attention to the whole film, you will see that Robert Patrick never blinks his eye when shooting. That was due to hard training and preparation. But why? He is a machine, and machines do not have flinching instincts.