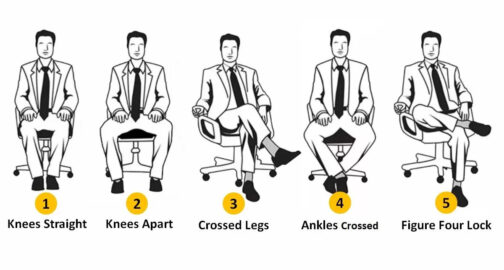 Sitting Position Personality Test: Do you sit with your knees straight? Knees apart? Ankles crossed? Crossed Legs? Or Figure-Four leg lock? Men Women readers, Know what your sitting position says about your personality and those of the people you know! 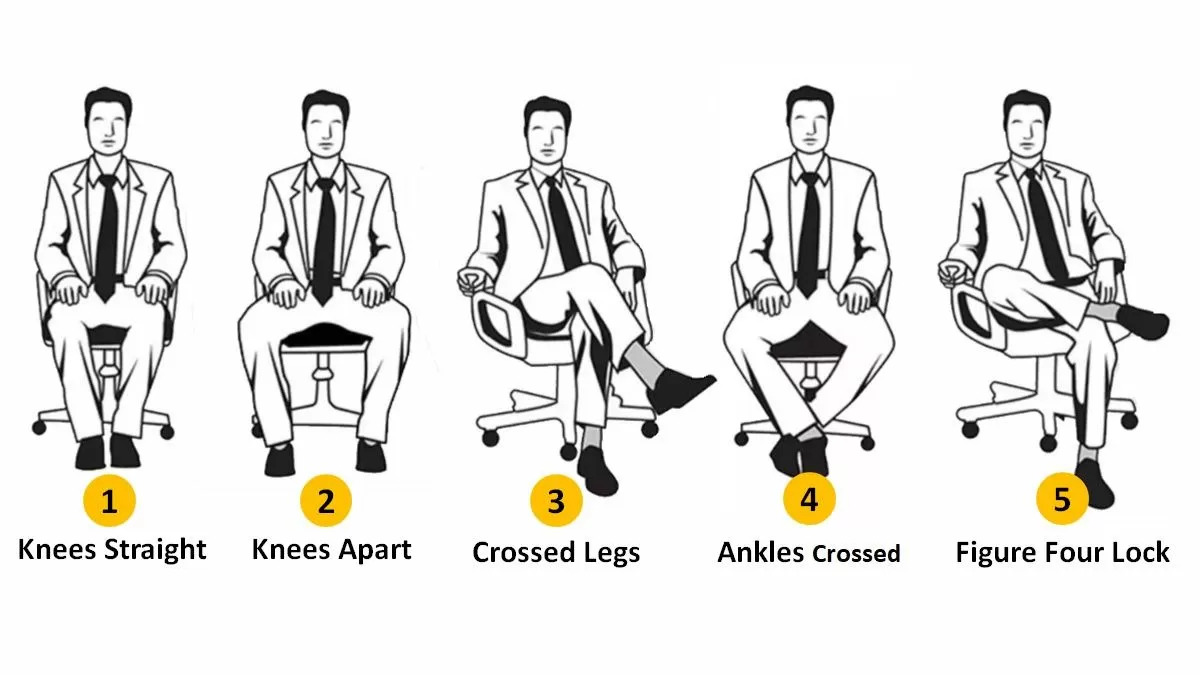 Enjoy reading about your sitting position personality traits and those of the people you know!

Ready to know what your sitting position says about your personality? 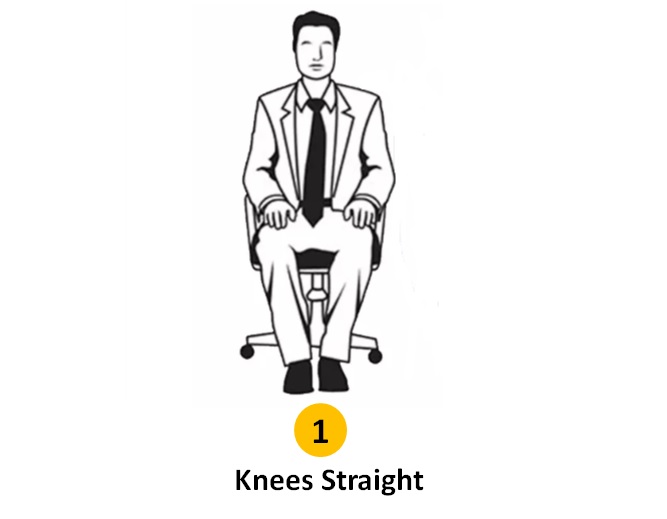 In a study by researchers at Ohio State University, it was revealed that people who sit with knees straight are perceived as qualified for a job role during their interviews. They are also found to be one who believes in themselves and their skills. They have a healthy and positive outlook toward themselves and as a result, they have fewer insecurities.

Sitting straight with knees straight is also an indicator of a high level of confidence. These people are intelligent, rational thinkers, and punctual in their everyday lives. They are least likely to reach late to any place, meeting, or interview. 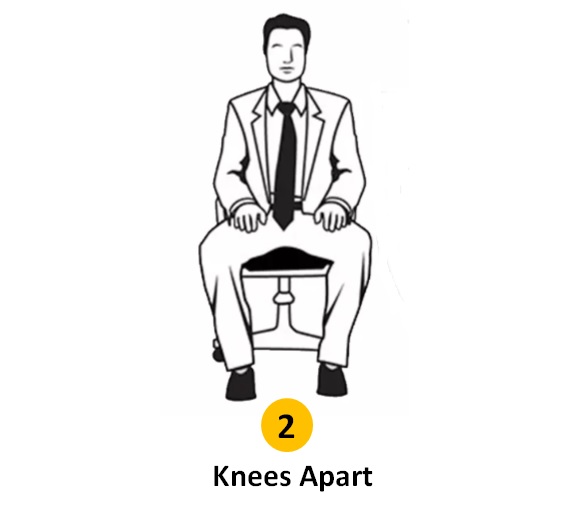 People who sit with their knees apart are found to have a self-centered vibe going on about them. They also appear to be arrogant and judgmental. However, studies have revealed totally opposite of what seems on the surface. You are most likely to be an anxious and worrisome person. You aim for perfection so much that you are constantly filled with fear of something going wrong.

Research has shown that people who sit knees apart have a very chaotic mind and schedule. They have a short attention span and have trouble concentrating. They are always exploring and fascinated by every new thing that they are unable to finish one task properly at a time.

They think they speak wise but usually, their thoughts are broken. They speak before thinking of the repercussions of their words or worse forget midway through the conversation.

They get bored easily. They can also get disinterested and leave relationships. These people need too much stimulating energy around them. In relationships or work, wherever it may be, they require constant nudges and discipline to make them work in an organized manner.

Men usually sit with knees apart or which is also called manspreading, however, these are usually seen as man child in psychology who need constant mothering or someone to keep them on track. 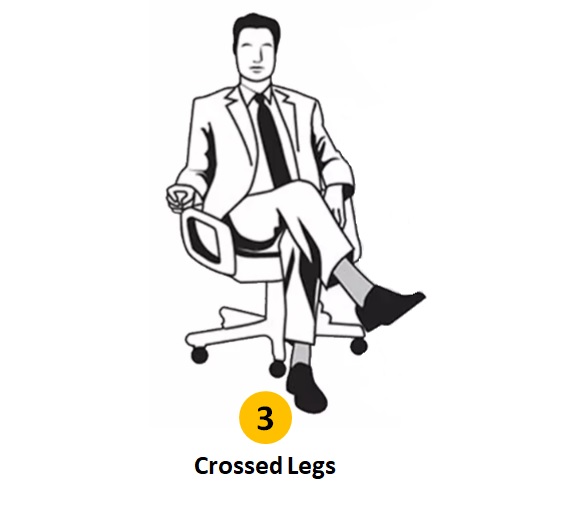 Are you artistic? Do you tend to dream a lot with eyes wide open? You must have a habit of sitting with your legs crossed. Right? Studies have revealed that if you are someone who sits with crossed legs are often exploding with out-of-box creative ideas. You have highly imaginative thinking. You are quite a dreamer. You can get lost in your train of thought while sitting in a group of people. You usually have a big personality but you are very less likely to take up the space in the room.

However, on a negative note, sitting with crossed legs also comes off as a defensive or closed-off attitude. You might be guarded and not want or able to let someone in your life. You are either fearful or hiding your insecurities.

Though, there are variations to these positions that may give accurate reading into if one is relaxed or fearful while sitting with crossed legs. If you are sitting relaxed in your chair with your legs crossed and your foot in the direction of the person across you then you are confident and enjoying the conversation.

Whereas, if you are sitting cramped or being fidgety with your legs tightly crossed then most likely you are uncomfortable. Your mind must be completely elsewhere at that moment.

During a conversation, sitting with crossed legs is seen as disinterested especially if your foot is pointing towards the door or away from the person you are talking to. Experts have noted that in a business setting, one sitting with a crossed leg is more likely to reject ideas, speak less, or even be inattentive compared to those sitting with open gestures. Worse, if you cross your arms also then it is a clear indication of your withdrawal from the conversation. 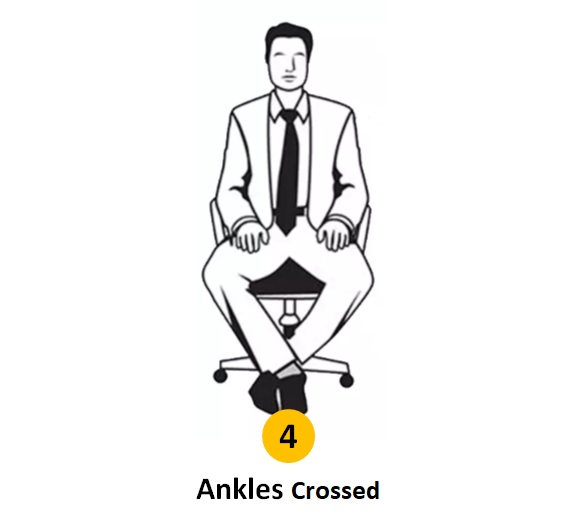 Did you know sitting with ankles crossed is a common sitting position of the British Royal family? If you sit with ankles crossed, you have a regal and queen-like way of living life. You are elegant, refined, and down-to-earth. You can appear highly confident and comfortable in any situation. You are seldom found making a panic, you are okay with things moving at their own pace. In fact, you have the ability to make everyone around you feel confident as well.

You will work hard and tirelessly to achieve your goals. Your ambition is contagious. You have a firm belief that your hard work will bring fruits.

You are a good listener and keep everyone’s secrets. However, you will never share your secrets or your next move with anyone else. You are quite conceited in matters of your private matters.

You also tend to be quite concerned with your appearance. You would maintain your outer appearance to the mark as per the occasion. You are able to disguise your unease or insecurities in a refined manner.

Behavioral experts and psychologists have also revealed that sitting with ankles crossed is also an indication of defensiveness and insecurities in some cases. For example, research in law enforcement, armed forces, and related fields has shown that most people with crossed legs during the interrogation or so have shown a high rate of holding back information. 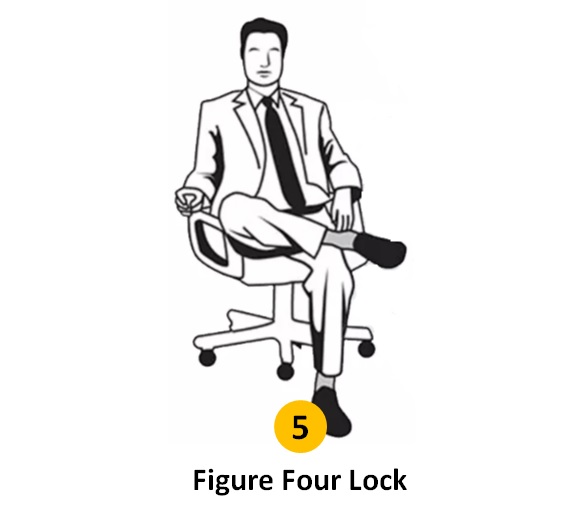 The Figure-Four leg lock sitting position looks like you are forming figure four (number 4) with your legs crossed, one ankle over another knee. If you sit in the figure four leg lock sitting position then it reflects that you are confident and dominating. These days, it is becoming most common among female folks. However, regardless of gender, if you sit with figure four crossed legs then you are found to be more dominant, relaxed, confident, and youthful compared to people with other sitting positions. You are secure and content in yourself. Even if you sense any lack of anything, you will put your mind and energy into fulfilling your desires yourself.

You will set your goals and work smartly till the time you achieve them. Establishing your career and education is a priority for you. It does not mean you don’t’ enjoy other aspects of life but you will always work extra hard for your career even on days you don’t feel like it.

Just as the position takes up more physical space, people with this sitting style also love their space and privacy. They will usually occupy bigger rooms, wardrobes, or any physical space they are in as a way to claim your territory.

Behavioral experts have also observed that people sitting with the figure four style tend to believe that everything has its own time and place. They see a divine order in everything.

They also have a big inclination toward dressing well and looking good. They however also have an argumentative or competitive nature and are most likely to reject any opinions other than their own.