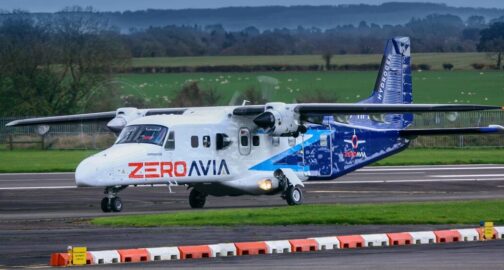 British-American hydrogen and electric aviation startup ZeroAvia has announced the first successful test flight of the world’s largest hydrogen-powered aircraft. A 19-seat upgraded Dornier 228 taxied, took off, flew for 10 minutes and landed at Cotswold Airport in the UK.
Dornier 228 is one of the classic twin-engine aircraft for local aviation. They were used in different countries and were produced by the German company Dornier GmbH from 1981 to 1998. For the test flight, ZeroAvia upgraded this aircraft, replacing one of the two engines with a hydrogen-electric one.

In the test configuration, the hydrogen-electric powertrain consists of two fuel cell stacks with lithium-ion battery packs to support peak power during takeoff. Hydrogen tanks and fuel cell power generation systems in the test design were placed instead of seats inside the cabin to make them easier to control.

For the commercial model, all engine elements will be moved outside the cabin. ZeroAvia says it plans to complete the flight-ready aircraft by the end of 2023. If everything goes according to plan, then by 2025 this 600 kW power plant will be fully certified and aircraft with a capacity of 9 to 19 seats will be able to operate commercial flights.

According to the company’s estimates, the upgraded aircraft will provide a flight range of about 556 km. This is less than the standard carbon-fueled Dornier 228 (1130 km), but exceeds the estimates of competing zero-emission models. For example, the Swedish Heart Aerospace was developing a 19-seat hydrogen model with a range of only 400 km.